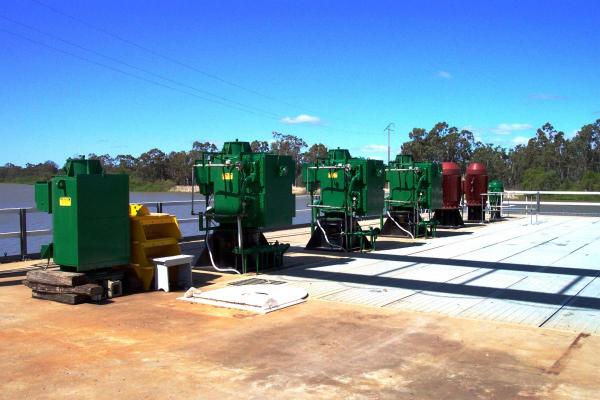 GJC Engineers's Role
GJC was commissioned to provide a SCADA based telemetry system for remote monitoring & control of each site, relaying both analog and digital data to a server located at the Main Pump Station.

The system is based around Wonderware Intouch Human Machine Interface visualisation software running on a Windows NT 4.0 PC platform, including a remote access dial-in facility. Alarming, real-time and historical trending, reporting and printing facilities have been included with the InTouch operator interface.

GJC opted to implement a telemetry network based on hardware developed by Miri Engineering, a Western Australian company. Although relatively inexpensive, the integrated telemetry units have proven to be highly reliable, easily configured and offer performance to match many high-end systems.

The Stage 1 project consisted of an MTU based at the Main pump Station, collecting data from two RTUs at the Domestic Tank Site and one relift site. The MTU communicates with the Intouch Software via the widely used Modbus protocol. All sites have battery based power supply backup, maintaining the radio network during power failures.

GJC are pleased to announce that RIT have since commissioned GJC to continue with Stage 2 of the project, including replacement of obsolete PLC hardware in the Main Pump Station in addition to each relift station.

Enhancements to the Intouch operator screens will allow full remote control of all sites and provide extra data storage and further reporting features.

Client Statement
GJC Engineers were commissioned by The Renmark Irrigation Trust to provide a Telemetry system that would allow for remote monitoring of a Relift pumping station and Domestic tank to prove the advantages and capability of a telemetry system. This would be stage 1 of a project that would expand to other sites if the Trust were satisfied with the resulting operation and benefits.

Stage one has proved to be most effective in providing additional information on the current operating conditions of these remote sites. Water distribution staff can easily view and analyse the information at the host computer within the main pumping station site. This allows quick response to faults or pressure problems that may occur.

Cost savings have resulted since staff no longer need to constantly travel to the sites to check operating conditions or to reset minor faults. The Telemetry equipment has proved to be wholly stable with communications between the sites totally reliable.

GJC Engineers have shown they are strongly committed to completing the task and are determined that the project will operate 'bug-free'. All of stage one was completed without interruption to normal operation of the sites.

They have provided useful advice to all aspects of the project with a 'long-term' view and have readily incorporated additional features requested by the Trust. Ongoing requests for support have been attended to quickly and effectively.

The Trust is very satisfied with the operation and the benefits of stage 1.

The service provided by GJC Engineers has been above expectations and the Trust has commissioned them for stage 2 of the Telemetry project. This will incorporate the other two Relift pumping station sites and upgrading of PLC equipment.